In the past few years, Turkey has become one of the most favorite countries for tourists from around the world thanks to impressive landscapes and nice beaches. Besides, this nation also possesses a number of sites with amazing historical architecture, which is an ideal destination for those who are a fan of history. If you are going to visit Turkey but do not know where to go, let’s keep reading for helpful ideas! 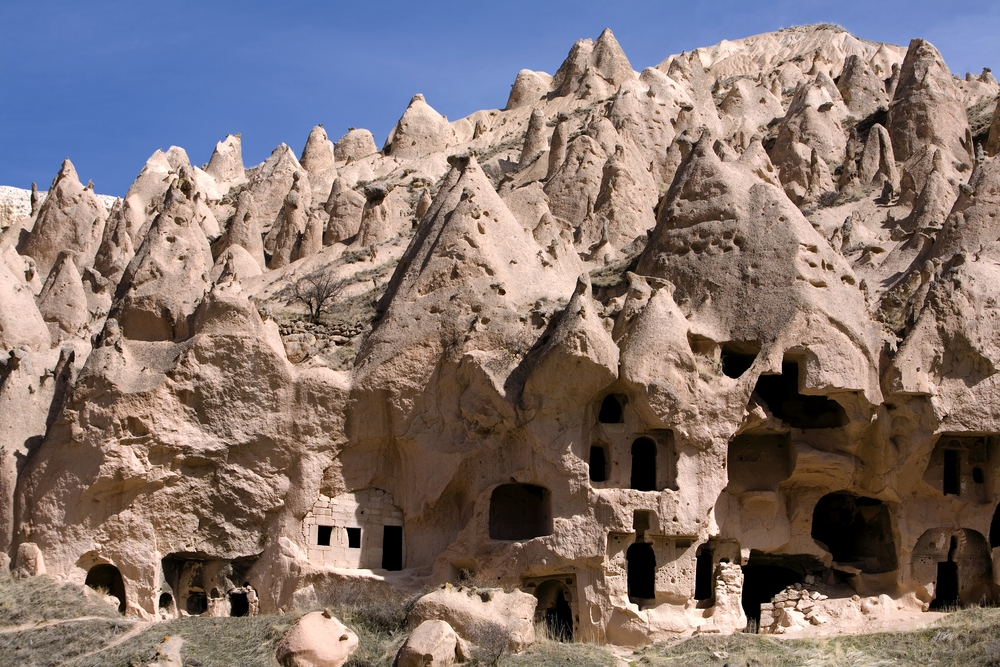 Hagia Sophia must be the first place to come when talking about Turkey. Before the construction of Catedral de Sevilla was finished in 1520, Hagia Sophia had been the largest church on earth which turned a new page for architectural history. Hagia Sophia was first built in 360 by the Greeks. However, after many fights against rebels, it was destroyed and reconstructed in 532. Then, this church became the place for citizens to come and pray.

After many centuries, Hagia Sophia has still remained the greatness of architecture from ancient times. The outer design is impressive with the predominant color of white. Coming inside, you will be surprised by the amazing interior.

The thing which attracts your attention first at the time you set your foot in is the vault with 40 windows in rows. This idea was come up by architects of Byzantine to get natural shines from the sun. Therefore, not many lights are needed to help you see everything clearly. In addition, those windows also help to reduce the weight of the ceiling to the church, which may be an improvement after the first dome collapsed.

On the walls of the church, there are lots of mosaics of Christ, the Virgin Mary, Gods, kings and impresses. Besides, there are also various types of complex shapes that make this church unique. The inner design takes a lot of time and effort to be fulfilled. Hagia Sophia is also well-known for storing a number of valuable antiques for archeology. You can find some special things such as nails from Christ’s gravestone, etc.

The Library of Celsus is the third biggest library of ancient times after Alexandria and Pergamum. It used to be an amazing structure in Ephesus but now is a part of Selçuk in Turkey. Having been set up in 114-117, Library of Celsus is considered one of the most impressive buildings in the Roman empire which consists of more than 12000 titles. 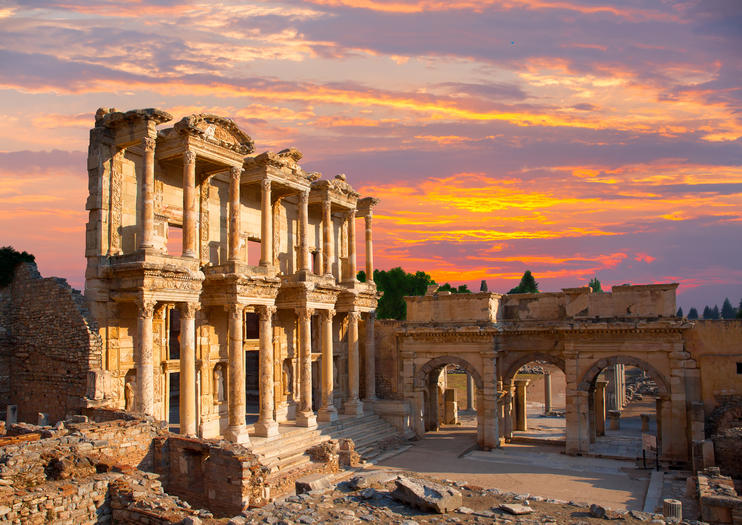 According to some sources, the interior of this library was destroyed by an earthquake in 262 AD. However, there have been a lot of hints proving that it was ruined by foreign enemies who invaded the country in the same year. Archeologists first discovered the Library of Celsus in 1903-1904, then they rebuilt the front side with anastylosis collected in 1970. 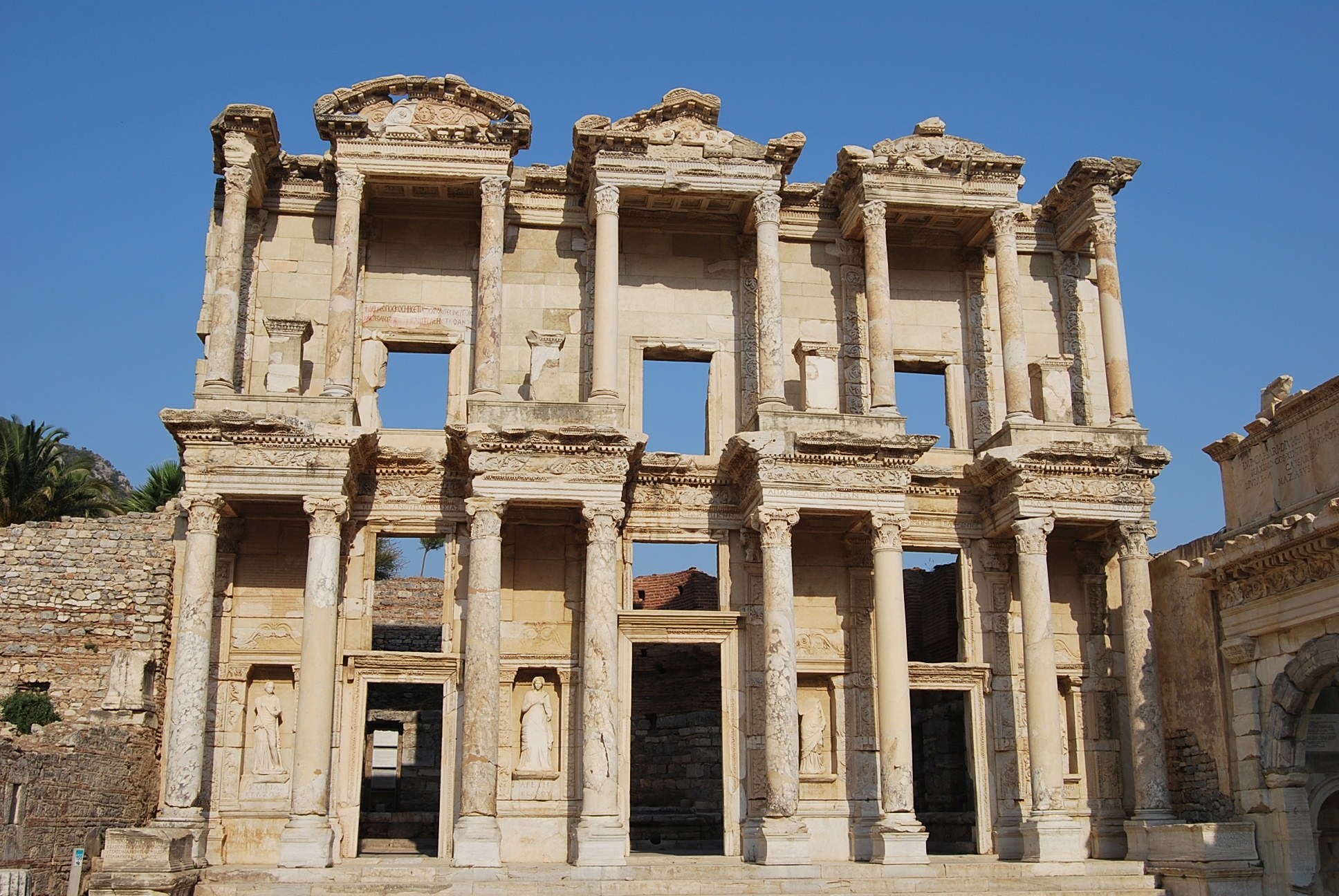 The Library of Celsus includes two floors that are designed uniquely. The main hall faces the East to get as much sunshine as possible. To protect the huge number of valuable books from unsuitable temperature conditions, ancient designers built two layers of walls separated by a 1-meter corridor. The basement of the library contains the tomb of Tiberius Iulius Celsus Polemaeanus. 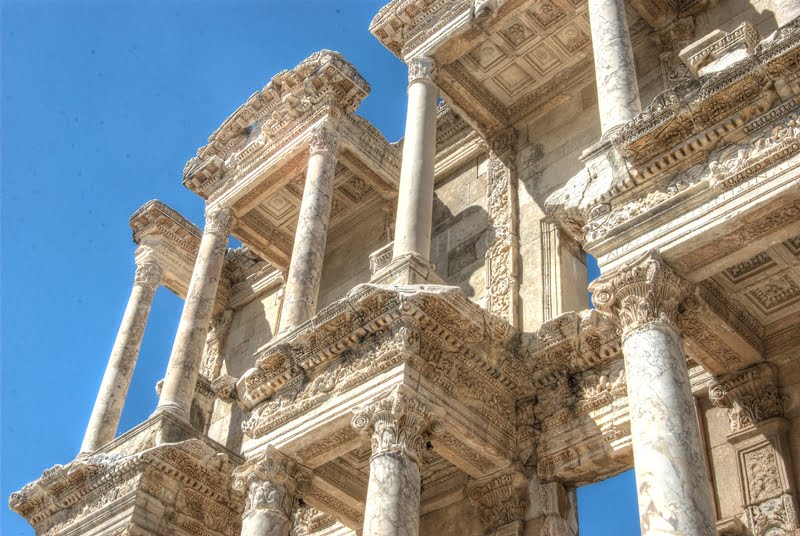 Experiencing lots of effects from natural conditions and wars, Library of Celsus has only the gate and some parts of the main hall left. However, it is still attractive to tourists by the beauty of antiquity. The Library of Celsus is a site that you must visit on arrival in Turkey.

Being constructed in 1348, Galata is the highest tower of Istanbul at that time with 220 feet in height. Ancient people use this tower to detect fire. However, it was burnt two times in great flames occurring in the 18th and 19th centuries. Then, thanks to the large-scale renovation in 1960, this tower has become one of the most attractive sites for tourism.

Galata Tower is a combination of a cylinder building and a cone ceiling, which makes it look like an upside-down pencil. Possessing an ideal height, this tower is a favorite place for travelers as they can see beautiful sceneries around by standing on it. This tower gives you a view of the whole Istanbul, Bosphorus strait connecting two parts of this city and the great bridge Galata joining the two continents. 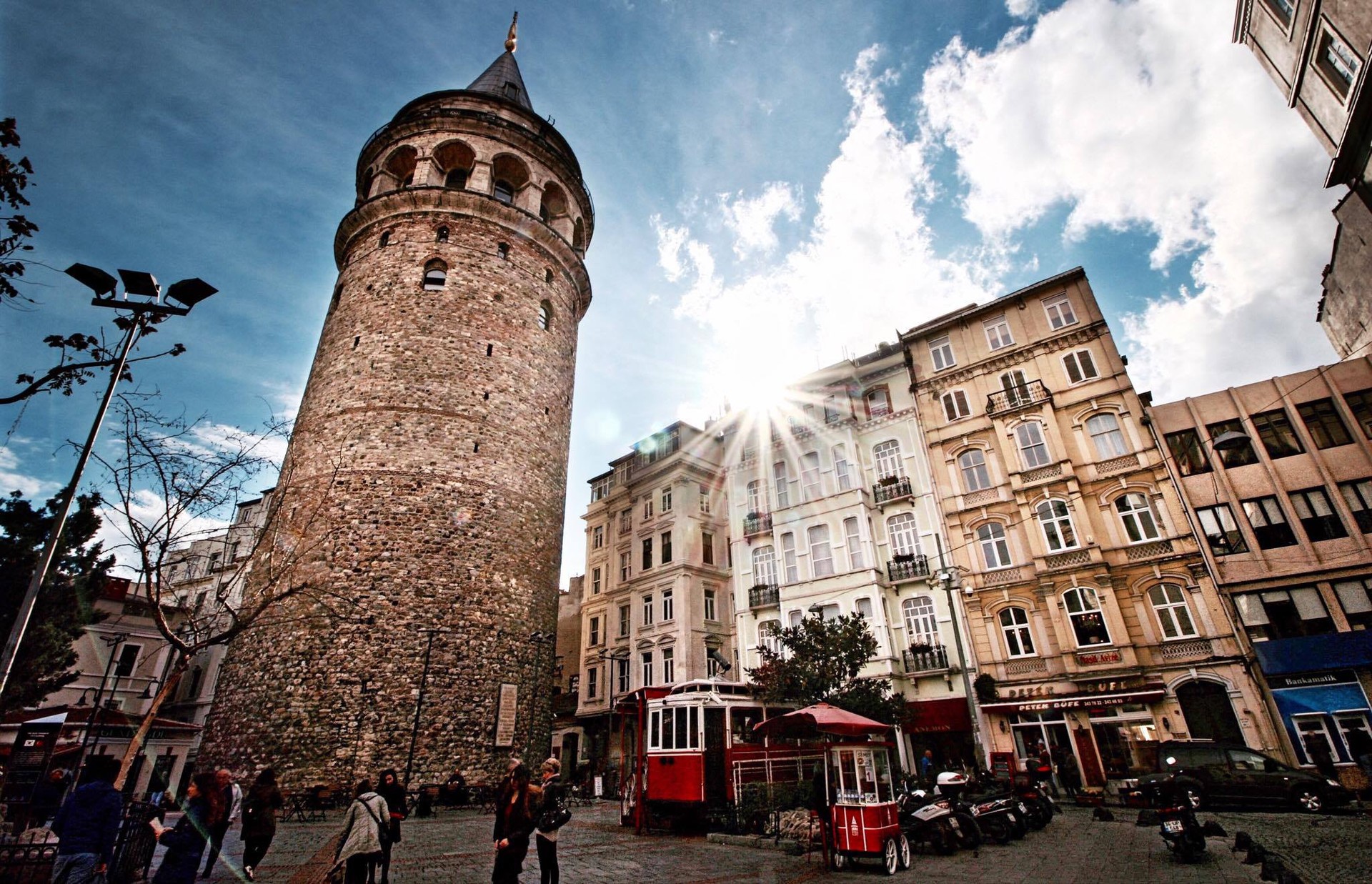 Located on the Beyazit square in the campus of Istanbul University, Beyazit Tower has been a popular tourism site in Turkey for its great history. The tower is 85 meters in height and used to be built with wood in 1749. Unfortunately, the vast fire Cibali in 1756 destroyed the whole building. 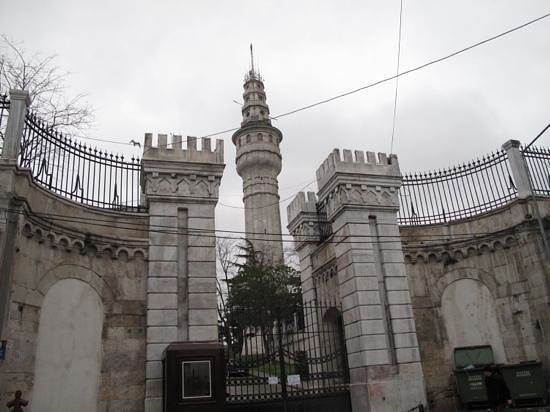 After the sad event, Beyazit Tower was rebuilt again. However, when king Sultan Mahmud II dismissed the Janissary army corps in 1826, groups of rebels fought each other and ruined the structure.

In the same year, a royal architect called Krikor Balyan designed the tower with wood again but this time he made it more durable. Nonetheless, Janissaries burnt it soon after. Thus, the tower was damaged by fire three times.

Finally, the Ottoman government decided to build the tower one more time with stones. The construction was done in 1828 by Senekerim Balyan, brother of the former architect. Inside the tower were 256 wooden stairs supporting firefighters in their work.

In 1977, Beyazit Tower was refurbished and equipped with modern technology. Then, it became the tower for weather forecast. If you come to visit Beyazit Tower at night, you will have a chance to see an amazing light system. For that reason, fans of taking selfies cannot miss this place.

Coming to Turkey, you will have a lot of places to discover as this nation possesses numerous amazing architecture. Every of its buildings has a historic story behind which you can find out when setting your foot in it.